First and foremost, it's my own 'victory'.  As mentioned in my older post "A Month Of Bountiful Blessings", I got good news from Australia. This is the day I have been waiting for and this afternoon, I went to the post office to collect my parcel from my friend Delirious Jellybean. I am so happy to receive it. Furthermore, the gift makes its way into my blogging History as the first gift ever from a fellow blogger.
Got the email on 18.12.2010 from Yileen  who goes by the nick Delirious Jellybean telling me that I was  Radhika's Story WINNER (that's how the heading of the email was.)  Let me mention a little bit on how I become the winner. I was at her blog one day and read her post on the give-away. She wanted participants to comment on human trafficking. Without hesitation, I tried my luck by responding and giving some comments and summed it up by saying I condemn human trafficking as immoral. It came as a surprise when she told me that I was the winner! Imagine how happy I was! Furthermore, I'm adding another great story to my collections of books. Thank you, Yileen, it means so much to me!
Recalling how I met Yileen, it was her who "caught" me while blog hopping. She wrote on my wall telling me that she was happy meeting another fellow Malaysian on blogsphere. Since then, we are friends. Currently, she is a PhD candidate studying Genetic Engineering in the field of  Plant Science at the Australian National University. She's going to be a scientist. Perhaps, you would like to check out her blog at http://www.deliriousjellybean.blogspot.com/ 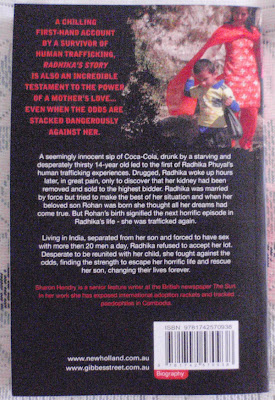 Another happy news  is Malaysia's national football team victory over Indonesia in  the Asean Football Federation (AFF) Suzuki Cup which was held in Jakarta, Indonesia on  29.12.2010.  I didn't watch it on big screen in town but watching at home made no difference because I was so restless like a centipede with athlete's foot! Just couldn't keep still because every minute was thrilling and I shouted in joy when our team scored a goal. Today, the victory make headlines in all the papers throughout my country. And to add another joy, our Prime Minister declared Friday a holiday to celebrate my country's first ever victory in the championship. Thank you, Mr. Prime Minister! 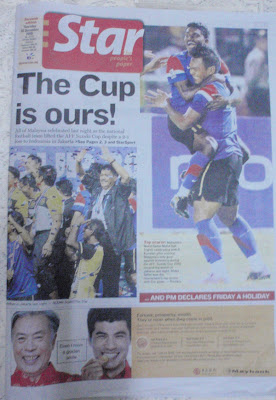 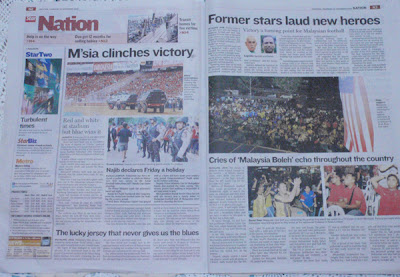 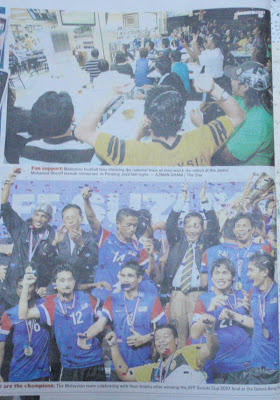 Well, those are the triumphs I am sharing with all of you.
As 2010 is coming to an end, I would like to wish everyone a happy and prosperous 2011!
Labels: Friendship, Gratitude, Happiness, Triumphs
Email ThisBlogThis!Share to TwitterShare to FacebookShare to Pinterest
Posted by Balqis DBJ at Friday, December 31, 2010